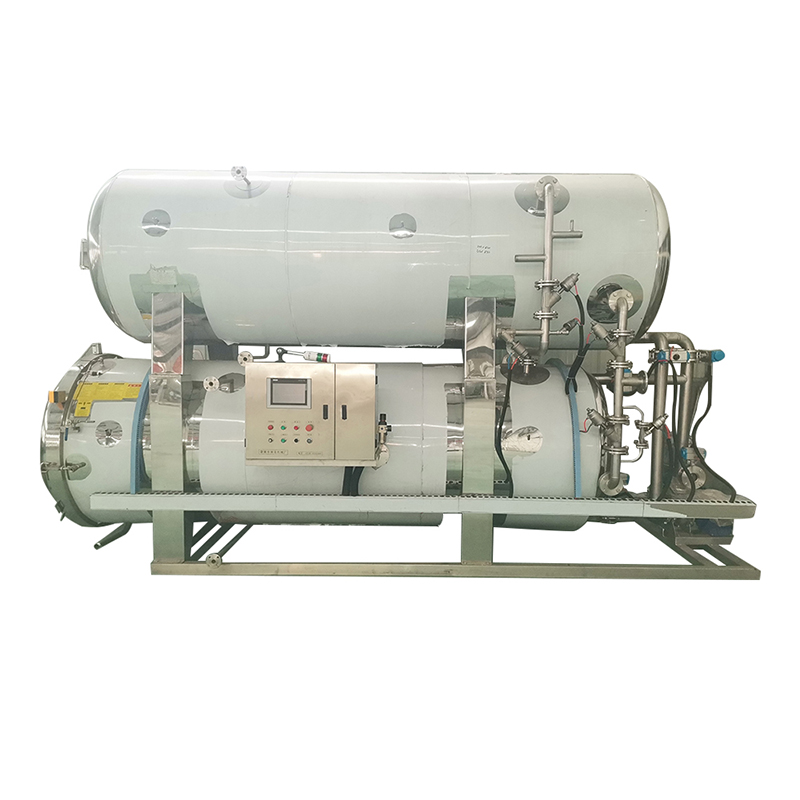 Water immersion retort/autoclave is that the product is immersed by water. This kind of retort is suitable for big pouches, PP/PE bottles, etc.


Send email to us

Water immersion retort/autoclave is that the product is immersed by water. This kind of retort is suitable for big pouches, PP/PE bottles, etc.

1. Process water is pre-heated in top water tank, so products can be heated rapidly. And process water can be recycled, so continuous production can save consumption of steam and water.

Our retort door is interlock to guarantee the door’s sealing.

Equipped with safety valve, when retort has problems, can manual opening the safety valve to relief pressure.

3. Our electric parts are Siemens and Schneider to guarantee our machine’s stable running.

To make it more convenient, we took the following steps:

1. According to product requirements, first preheat the upper pot to about 0-120℃ (adjustable according to the product process), fill the sterilization pot with all the goods while preheating, close the pot door, and open the interlocking device.

2. After pumping the upper tank water into the sterilization pot to the water level gauge, the water level transmitter outputs 4-20 Majn to the PLC control system, and the water pumping system is automatically closed to circulate the hot water in the pot.

3. During the cycle, in order to ensure the uniformity of the water outlet in the pot, a three-point series connection is adopted, connected with a φ108 pipe, and then a large-diameter water pump is used for heating (this hot water exchanger avoids direct heating in the pot) When it is warm, the steam will directly contact the goods, making some of the goods high in temperature), and then pass through eight points in the pot (eight points, divided into two points up, down, left and right) to make hot water directly into the sterilization pot For circulation, a flow conversion valve is arranged in the middle of the pipeline to make the hot water flow alternately and uninterruptedly to ensure that the temperature in the pot is even.

4. When the hot water is circulating, if the barrel of the sterilization pot is longer and the distance between each point is longer, in order to make the hot water flow more evenly, a stainless steel pipe is used as the guide, and a water outlet hole is punched on one side of the pipe. The cross-sectional area of the quincunx tube is 1.2 times the cross-sectional area of the small hole). Taking into account the resistance of water, the tube hole is first small and then large, and the hot water in the pot is circulated once every time.

The retort principle is based on direct steam injection to heat the water in top tank to the pre-set temperature in combination with continuous circulation of process water and with application of compressed air if necessary, this allows minimizing the sterilization temperature without any risk on damage of the container, which results in the shortest process time and thus a better product quality.

Compressed air can be applied during the complete processing cycle, it can be programmed in accordance to the process requirements and controlled by pneumatic valves for compressed air inlet and pressure relief to ensure the preset pressure in the retort.

A warning light signals the end of the cycle, when it is over. The door opening is authorized to unload. It is then ready for a new cycle.

During the whole process, the rotating body rotates according to the preset rotate speed. (0-12R/M, customer assign rotate speed ).

Write your message here and send it to us